Renault reveals electric-hydrogen hybrid concept car, says it will have range of up to 497 miles 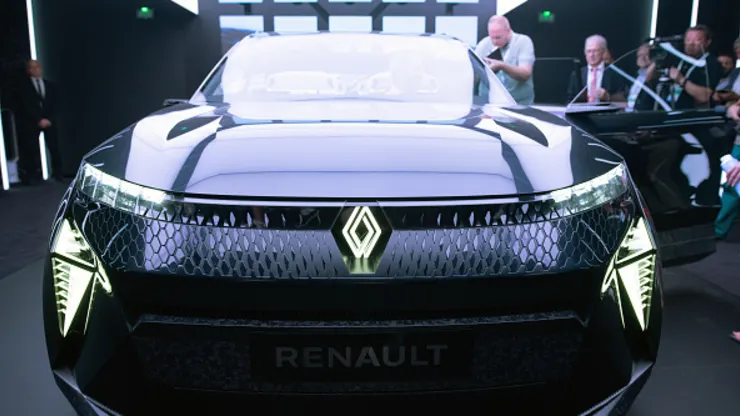 Renault has released details of an electric-hydrogen hybrid concept car, with the French automaker describing hydrogen technology as being “one of the options to make electric vehicles more convenient.”

The design for Renault’s Scenic Vision incorporates a hydrogen engine, electric motor, battery, fuel cell and a hydrogen tank. The 2.5 kilogram tank is located at the vehicle’s front and, Renault said, would take around five minutes to fill.

According to a document published on Thursday that outlined the concept, the Scenic Vision’s 40 kilowatt hour battery is recyclable and will be produced at a facility in France by 2024.

In a statement, Gilles Vidal, who is director of design at Renault, said the concept “prefigures the exterior design of the new Scénic 100% electric model for 2024.” The company said the electric-hydrogen powertrain was “part of a longer-term vision, beyond 2030.”

The broad idea is that the Scenic Vision’s hydrogen fuel cell would help extend the vehicle’s range during longer trips. “In 2030 and beyond, once the network of hydrogen stations is large enough, you will be able to drive up to 800 km [a little over 497 miles] … without stopping to charge the battery,” Renault said.

Lithium’s vital role in the energy transition sends prices to record highs. How to play it

Described by the International Energy Agency as a “versatile energy carrier,” hydrogen has a diverse range of applications and can be deployed in a wide range of industries.

It can be produced in a number of ways. One method includes using electrolysis, with an electric current splitting water into oxygen and hydrogen.

If the electricity used in this process comes from a renewable source such as wind or solar then some call it green or renewable hydrogen.

It’s envisaged that Renault’s hybrid would use green hydrogen, although the vast majority of hydrogen generation is currently based on fossil fuels.

Renault’s electric-hydrogen concept illustrates how car companies are looking to find ways to develop low and zero emission offerings that can compete with the range of gasoline and diesel vehicles.

“Several systems to complement electric motors are being explored today to address the requirements associated with long-distance driving,” Renault said. “Hydrogen technology is one of the options to make electric vehicles more convenient.”

In the field of hydrogen mobility, the Renault Group has already set up a joint venture with Plug Power called Hyvia. Among other things, it is focused on hydrogen fuel cells in light commercial vehicles and the rollout of hydrogen charging facilities.

More from CNBC Climate:
Read more about how businesses and consumers are fighting and adapting to climate change:

Americans are fleeing climate change — here’s where they can go

Map of nuclear power in the US: See where reactors are located

Renault’s idea of developing a passenger vehicle that uses hydrogen technology is not unique.

Toyota, for instance, started working on the development of fuel-cell vehicles — where hydrogen from a tank mixes with oxygen, producing electricity — back in 1992. In 2014, the Japanese business launched the Mirai, a hydrogen fuel cell sedan.

Other major companies like Hyundai and BMW are also looking at hydrogen, as well as smaller concerns such as U.K.-based Riversimple.

While the above companies are looking at the potential of hydrogen, some high-profile figures in the automotive sector are not so sure. In Feb. 2021, Herbert Diess, the CEO of Germany’s Volkswagen Group, weighed in on the subject. “It’s time for politicians to accept science,” he tweeted.

“Green hydrogen is needed for steel, chemical, aero … and should not end up in cars. Far too expensive, inefficient, slow and difficult to roll out and transport. After all: no #hydrogen cars in sight.”

Despite Thursday’s unveiling of the Scenic Vision concept, even Renault CEO Luca de Meo would appear to be cautious when it comes to talking about hydrogen’s prospects, according to comments published by Autocar.

Elsewhere, in Feb. 2020 Brussels-based campaign group Transport and Environment hammered home just how much competition hydrogen would face in the transportation sector.

T&E made the point that green hydrogen wouldn’t only have to “compete with grey and blue hydrogen,” which are produced using fossil fuels. “It will compete with petrol, diesel, marine fuel oil, kerosene and, of course, electricity,” T&E said.

‘You need to be global and local at the same time’: TikTok CEO Shou Zi Chew on creating a successful

2022-06-09
Under a new leadership team helmed by Chew, ByteDance-owned TikTok is no longer just a popular entertainment app but a revenue-generating business.Since its launch in 2016, TikTok has had frequent ...
News

Renault reveals electric-hydrogen hybrid concept car, says it will have range of up to 497 miles

2022-05-21
Renault has released details of an electric-hydrogen hybrid concept car, with the French automaker describing hydrogen technology as being “one of the options to make electric vehicles more conveni...
News

‘In the past ten years, my computer and BlackBerry have never left my side’: ByteDance’s new CFO Jul

2022-05-19
Through sheer dedication and hard work, the former corporate attorney has built a reputation as a top dealmaker for Chinese companies planning to go public.On April 25, in a 600-word memo circulate...
News

2022-05-19
China is trying once again to lift the spirits of its huge tech industry after a bruising regulatory offensive that has weakened some of its biggest businesses at a time of stalling economic growth.
News

Google announces new smartphones, a watch and tablet at its I/O developer conference

2022-05-18
Google on Wednesday unveiled an expanded lineup of hardware products in the latest sign it remains committed to moving beyond its core advertising business and competing with the likes of Apple.
News
电话咨询：020-000000
QQ咨询：258506508
微信客服 扫码咨询